The McCully Log House, built in the early 1800s, is among the oldest structures in Monroeville. The land upon which the house was built belonged to one of the area’s original settlers’ -- the Miers’ (Myers) family.

In Colonial times, the Widow Miers (Myers) was proprietor of a trading post at the mouth of the Turtle Creek. In 1787, Martha Miers (Myers) was granted some 300 acres of land in what was then Plum Township (today’s Monroeville), and that land stayed in the Miers’ (Myers) family until it was sold, in 1810, to one John McCully. The log house was probably built by John McCully about that time. John built his house a block away from his brother James’, another local log house which has been restored (and still stands today as a family home) on James Street.

Over the years, the house was occupied by a number of owners; additions were made, and the appearance changed, most notably by a “modernized” facing that covered the logs. In time, the structure became run down, dilapidated, and finally abandoned. By 1992, it had been condemned and slated for demolition.

It was then that a joint effort for the preservation of the house was launched by the Monroeville Historical Society, and the Municipality of Monroeville. Funds were raised and a group of volunteers worked to strip away the 20th century façade, dismantle the house, carefully tag all the components, and transport it, piece by piece, from its original location at 106 Queen Drive behind the Monroeville Mall.

Over the next three years the building was re-assembled at a site next to the historic McGinley House on McGinley Road. Once there, it was placed under the care of the Monroeville Historical Society, and restored it to its original appearance.

The restoration was completed in 1995, and today it provides an excellent example of an early American Log House. Because it has two stories, the structure is referred to as a “Log House,” rather than a “Log Cabin” (typically one-room, one-story homes). This example is unique in having an unusual double-decker front porch with the two massive logs that support the second floor cantilevered out to also support the upper porch. The interior has been furnished with period furniture, farm implements, and other artifacts typical of an 18th century farmhouse.

Note: Information on the McCully House and its history was contributed by: Marilyn Chandler, Bill Johnson, Lois Lyman, and Marilyn Wempa. 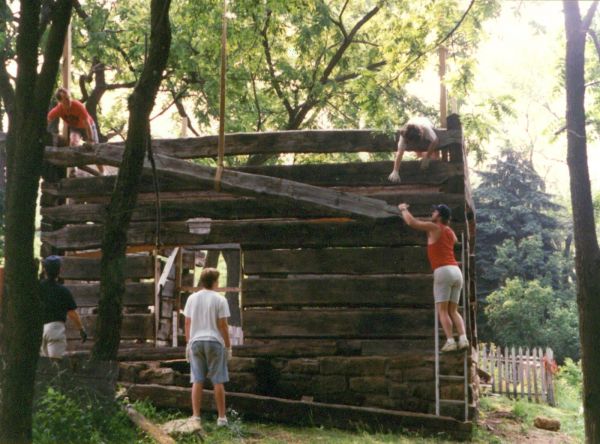 McCully House being reconstructed in 1993.

McCully House being restored in the 1990s.

The McCully Log House being re-constructed on the McGinley property by MHS members and other volunteers.