The original McGinley House Herb Garden was laid out in early spring 1976 with brick walks in a traditional geometric pattern dividing the garden into many sections. Westinghouse Electric Corporation, which had donated the house and grounds to the Municipality of Monroeville, provided for this portion of the work. The garden was fenced in by a local boy scout and his troop as part of an Eagle Scout project; making a garden measuring 30 feet by 60 feet.

Traditionally, herb gardens featured separate sections for four different types of herbs; fragrant, culinary, medical and dying herbs. Three local garden clubs each selected one of the first three types, and so the first garden featured fragrant herbs such as lavender, sweet woodruff, and rose geranium; culinary herbs such as sage, thyme, and marjoram; and, medicinal herbs, such as comfrey, foxglove, and chamomile. The dying type of herb was represented in plants and trees outside the garden such as poke berries and black walnut.

By 1980, the garden clubs had ceased to look after the garden, and a member of the Monroeville Historical Society took over care of the garden. In 1993, the Society decided to downsize the garden to make room for erecting the McCully Log House and its handicapped access ramp. It was also an opportunity to repair the deterioration of the original fence. Again, a local boy scout and scouts from BSA Troop 184 rebuilt the fence using the original pickets and gates, but replacing the upright and support members.

Today the garden is divided into four sections by brick walkways meeting at a center medallion that contains the 1976 Bicentennial Brick. The walks were installed by member of the Historical Society using bricks from the original garden. 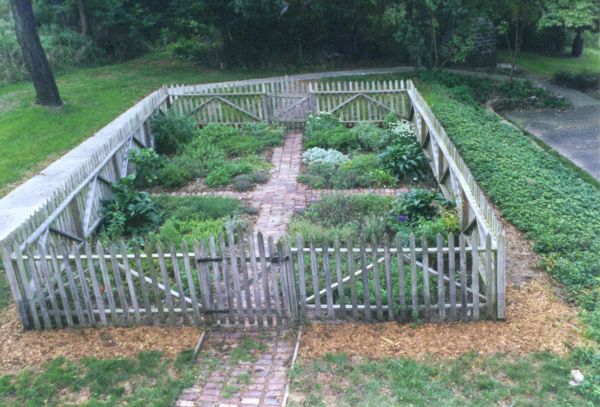