Over the years, Monroeville has seen its share of bridges, tunnels, trestles and overpasses -- all built in an effort to ease travel along its hilly terrain. The MacGregor Road stone bridge, located off Beatty Road near Route 22, is a well-preserved example of the sort of 19th century one-lane structure once built to accommodate horse-and-buggy and foot traffic. Although it is typically dated from the 1870s, local historian Charles Coates suggests a much later date based on Thompson family lore.

The story goes that in 1900 Robert Thompson married Mary Carline Cooper and the couple moved into the Thompson farmhouse. It so happened that the workers who were building the bridge were boarders at the farmhouse when the newlyweds first moved in to take up residence; thus the bridge would have dated from 1900.

The bridge is a gracefully-curved, 14-foot segmented arch structure of cut stone, that once served MacGregor Road by passing over a stream in the course of connecting Beatty Road to Center Road.

The stone bridge was abandoned in the early 1920s when old Route 22 was opened, and the gully was filled in, burying the understructure of the bridge. The property then reverted to the ownership of the adjoining landowners, the Burke brothers.

The Burke’s estate was bequeathed to the Catholic Diocese of Pittsburgh, and sold in the 1970s to Center Associates, a group of developers who used the site for a shopping center.

In 1985, The Old Stone Bridge was awarded landmark status by the Pittsburgh History and Landmarks Foundation. 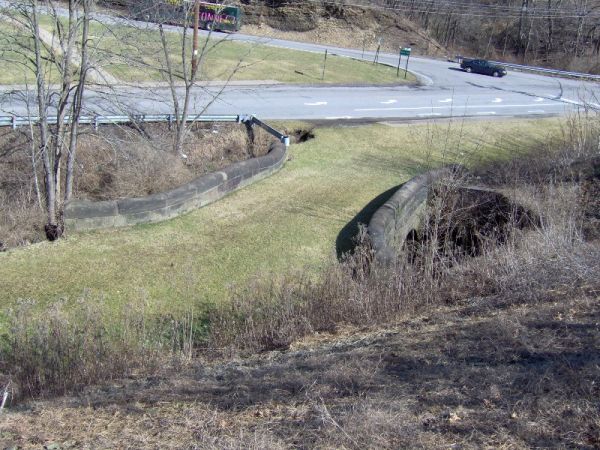